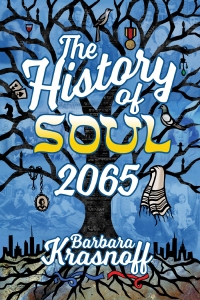 It’s been a while since I wrote a blog entry in BrooklynWriter, and I realize that this is a Very Bad Thing, especially because my first book is actually within months of being released.

So first, the details so far: The name of the book is The History of Soul 2065. It’s a mosaic novel — a collection of interconnected short stories — based on stories that I’ve written over the years, and which I realized a little while ago were actually about the same two families. It’s being published by an independent press called Mythic Delirium, which is owned and operated by the very talented Mike and Anita Allen. The official publication date is June 11, 2019, and it will be available in a number of online venues (where it’s currently in pre-order). We’ve having a number of events to publicize/celebrate it, including at NYRSF Readings this coming Tuesday (7 p.m. at The Brooklyn Commons, 388 Atlantic Avenue, Brooklyn, NY) with myself and Theodora Goss (author of Snow White Learns Witchcraft), and at Readercon this July, where the book will be officially launched.

Mike has been working very hard to get word out about the book. And he’ll need to, in order to battle the author’s (in other words, my) natural pessimism, which is even now busily and silently screaming, “nobody will read it” “nobody will like it” “you’ll sell a few copies to your close friends, and that will be it” etc. etc. All my writer friends  know exactly what I’m talking about. Well, most of them, anyway.

So I’d better stop listening to that voice and get to it — keeping this blog updated, keeping this site updated, and perhaps talking a bit about the various stories that make up the book, why they were written, and how. And taking some time to create more stories.

The history and background behind the stories in THE HISTORY OF SOUL 2065 can be found in my new website.

When the little yellow flowers began dotting the lawn, the flamingo was alarmed. "Is it some sort of strange disease?" he cried.⠀ ⠀ "No, you idiot," the flowers replied in chorus. "It's spring!" #theirbackstories