What with a full-time job, an attempt to keep my writing up and other obligations, I haven’t done a lot of “going out” lately. So it was really nice to to be able to treat ourselves to 54 Below Sings Starmites, a cabaret-type performance of a 1980s comic-book musical called, yes, Starmites. It was directed by Pat Cerasaro & Barry Keating; Keating wrote the music and lyrics; he also wrote the book along with Stuart Ross. 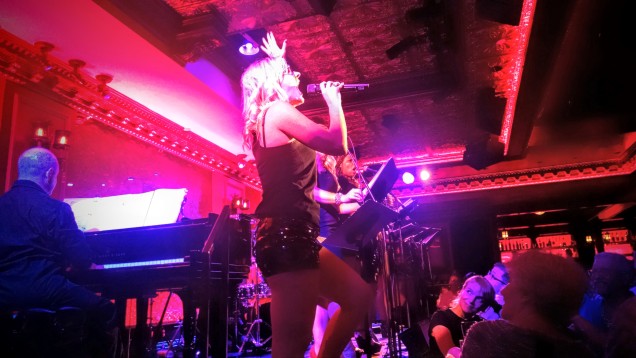 54 Below is a nightclub in the lower level of what was, of course, the former and notorious Club 54 (the upper level is now a theatre owned by the Roundabout). We had a somewhat expensive but extremely yummy dinner; then an enthusiastic and very talented cast and band performed the musical numbers on a dangerously small stage while the story (such as it was) was narrated by Liz Larsen, a member of the original cast.

It was a huge amount of fun. The whole cast was great (and negotiated their way through a few mistakes and glitches with professionalism and humor). I was especially impressed by Cheryl Freeman, who belted out a song called Hard To Be Diva with incredible energy, and Brian Charles Rooney, who played the bad guy with relish and sang The Cruelty Stomp wonderfully, throwing in some jazzy riffs that that directly referenced Cab Calloway, among others.

Many thanks to Sheri Lane and Barry Keating for helping us discover this event.